Today is International Women’s Day, and we here at Make Us Strong are celebrating.

As part of Oxfam’s Sisters on the Planet Summit, four Truman Project military veterans – Erica Jeffries, Jan Donatelli, Gail Harris, and Robin Eckstein – are carrying the message to Congress today that investing in women in developing countries is crucial to tackling hunger and poverty worldwide and is, ultimately, vitally important to our nation’s security.

Did you know that 50% of the food produced around the globe is produced by women? As our own spokeswoman Janessa Goldbeck mentioned in her recent blog post, in developing countries, women are often the main or sole providers of food to their families.  The surprising reality is that often these people go hungry, not from a lack of food or too many people, but simply because the food they need is in grain silos in Iowa or Innsbruck. It’s a reality that ought to make us concerned about our foreign assistance policies.

The highly decorated service of all four Truman veterans makes them unique spokeswoman on this issue.  Today, Erica, Jan, Gail and Robin will join 80 other powerful women leaders –  including Oxfam’s Global Ambassador, Kristin Davis, who thanked them for their tireless service and leadership – to ask our elected officials to support proven solutions to hunger and poverty, not only because it’s the right thing, but also because doing so will help keep America safe. 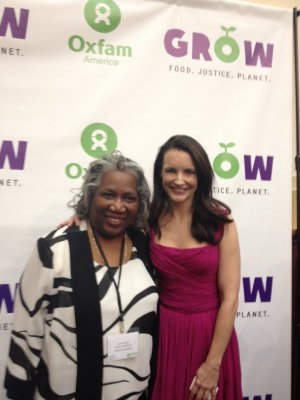 You might very well be asking, what’s the connection between food security and national security? The reality is, hunger makes the world unsafe. A primary reason that people to terrorism or piracy is that they are looking for a way to put food on the table.  Some terrorist groups have capitalized on this and now provide food services to people in the hopes of engendering more support and recruits.

In addition, hunger can cause mass migration and political instability. Migration flows have destabilized countries and threaten to do far worse.  And in 2008, when world food prices went soaring, riots sprung up all over the world from Haiti to Egypt, protesting the high cost of food.

These issues affect our national security and our geopolitical position. So, while feeding the world is the right thing to do,  it is also a safety necessity. That is something these four veterans understand.  For example,  Captain Gail Harris, US Navy (ret.) worked closely on the U.S. European Command’s operations in Kosovo. The humanitarian aspect of that crisis was great, and the need to keep people well fed and safe was part of a broader international agenda. Captain Harris witnessed this first-hand.

We are so grateful to have these women here to represent Make Us Strong, and to stand strong today, on International Women’s Day.