On the front end: Development & Diplomacy

It’s been a busy week on Capitol Hill for those of us who followed Secretary of State Hillary Clinton’s testimonies on the President’s FY13 International Affairs budget to the House Foreign Affairs and the Senate Foreign Relations Committees.  While Secretary Clinton once again declared her steadfast support for strong development and diplomacy funding, the debate happening off the Hill–and all across America– about this issue remains at the forefront of the Presidential race. 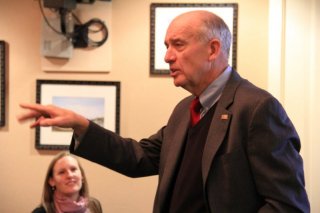 In an op-ed appearing in today’s The Tennessean, Make US Strong advocate Lt. General John G. Castellaw, USMC (ret.) turned his focus to the GOP Presidential primaries and questioned if candidates can agree that military force alone, in places like Iraq and Afghanistan, is not enough to ensure the long term stability and prosperity of these countries.  Having served in places such as Chad, Afghanistan, and  East Timor Lt. General Castellaw knows that in order to keep our country safe, we can’t turn our backs on these countries after our troops leave.  We must “preserve the gains of our military” and provide agencies such as the State Department, USAID, and MCC with sufficient resources to tackle long-term challenges like strengthening rule of law, providing sustainable economic opportunities, and building democratic institutions.

“It just makes sense to support development and diplomatic actions that address people’s basic needs to prevent the desperation that breeds terrorism and ends as a threat to our own nation….Even now, as the military ratchets down operations in Iraq and Afghanistan, the diplomats and development experts are the ones who must preserve and build on the gains won by force of arms. Establishing a strong civil society and the rule of law bolsters a fair and free government. Building basic infrastructure helps stabilize parts of the world critical to our own national interests. Rather than fighting first, our goal in the future should be support for diplomacy and development on the front end.”

Hear more from Lt. General Castellaw about how international development keeps America safe and secure in our recent campaign video:

The video cannot be shown at the moment. Please try again later.