A New Directive for Sub-Saharan Africa

According to President Obama, “Africa can be the world’s next major economic success story.” This bold prediction was included in the announcement of the new U.S. strategy for involvement in the region, the Presidential Policy Directive for sub-Saharan Africa (PPD). 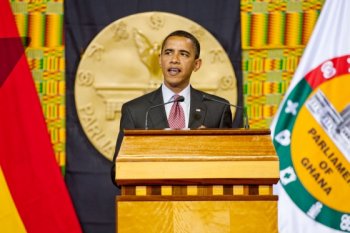 The optimism of his statement is less wide-eyed than it would initially seem. Six of the world’s ten fastest growing countries are in sub-Saharan Africa—with growth rates consistently over 6% annually. Countries like Rwanda, Ethiopia, and the Gambia have seen under-five mortality rates decline by 25-40%, and along with South Asia, the region has made the fastest progress on primary school completion rates in the world.

However, sub-Saharan African countries will continue to face challenges. The PPD, issued June 14th, is an important step for the Administration—the first one that’s been taken since President Obama’s speech in Ghana in July 2009. The President’s new strategy therefore comes at a crucial time, recognizing the tremendous potential for African countries both as strong economic and trading partners and as regional security allies, while simultaneously highlighting areas in need of continued support.

Transparency and accountability in institutions are stressed as essential, both in supporting democracy and in fostering economic growth. The U.S. will work to increase African country participation in international programs like the Extractive Industry Transparency Initiative, which has developed a set of reporting guidelines in natural resource extraction, especially oil and mining, and to date has only 14 countries in sub-Saharan Africa participating. The U.S. will also take a leading role in lowering barriers to inter-regional and international trade, and increasing access to global markets. Through standardized trade policy, improved infrastructure, and regulatory coherence and transparency, the region will continue to open up for trade and investment. To help U.S. businesses take advantage of these burgeoning markets, the PPD announces the “Doing Business in Africa Campaign” to help American business owners identify and capitalize on new opportunities.

Unfortunately, the PPD lacks detail in many areas—particularly the fourth pillar on promoting opportunity and development. Among its priorities in this area, the PPD lists food security, public health, humanitarian crises, women’s empowerment, the environment, and poverty reduction. The low level of specification on the program work in these areas seems to echo a marked shift in the Administration’s policy toward Africa away from development aid and toward governance, transparency, economic growth, and trade. The PPD does, however, recognize the challenges faced by low-income countries and the need to address “constraints to growth”—although it fails to define the term more clearly.

U.S. support for economic development, poverty relief and democratic institutions are vital to ensuring peace and security in the region. Perceived, widespread discrimination and economic inequality have been identified as among the root causes of a number of conflicts in Africa including the Sudan, Liberia, Côte d’Ivoire, Mozambique, Burundi, Nigeria and others. Low revenue and limited capacity of the security sector make governments’ less able to address regional security issues—the recent cross-border raids between Liberia and Côte d’Ivoire, and the ongoing regional complexities of the Great Lakes region are two unfortunate examples.

Regional security in sub-Saharan Africa is crucial—both for promoting economic growth in the region and for ensuring the safety of American citizens here at home. Building the capacity of security forces in the region means building capacity in the fight against al-Qa’ida. Stronger border control capabilities means more effectively combatting the transnational trade of illegal arms, drugs and WMD technology and materials. Strengthening regional security forces means that African countries will be able to ensure their own regional security, and prevent their own conflicts. The PPD acknowledges the importance of these steps, specifically in the third pillar and more generally throughout the strategy.

In other words, the new U.S. strategy in sub-Saharan Africa is about more than international development. In addition to opening new channels for commerce and promoting democracy, the PPD is a revised strategy for international peace and security.