Make US Strong’s spokeswoman Janessa Goldbeck recently made a pit stop in Silver City, New Mexico on her cross-country cycling tour talking about how international development keeps America safe.  Janessa’s tour has been highlighted by meetings with elected officials to deliver the message of the Make US Strong campaign.  In Arizona, Janessa met with Senator Jon Kyl’s office, the second highest-ranking Republican Senator, to discuss support for international development funding.  Tomorrow, Janessa will bring the message to with staff from Senator Tom Udall’s office.  The Senator sits on the Foreign Affairs Committee and the subcommittee on International Development and Foreign Assistance, so his support for development is critical. 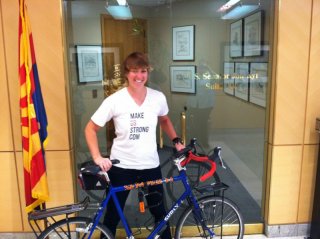 Janessa has been getting media attention, too: in Silver City, The Silver City Sun-News took notice of the Cycle For Security Tour.  Reporter Aaron West explained that Janessa, “is biking across the country and meeting with elected officials and anyone who wants to talk, as she put it, in order to spark discussion about issues like building schools internationally, water sanitation, food security and increasing the State Department’s budget.”

Stay tuned for more news from the road!